The sky is the limit

“We are not at the limits. The sky is the limit…”

“We are creating possibilities for the future. We are opening up opportunities for our children, for their children to continue to build, to upgrade and to reinvent our city for many more years to come.”

So what are some of these opportunities?

By 2018, Changi Airport’s Terminal 4 would have already replaced the Budget Terminal, and Terminal 1’s current open-air parking lot will have become the “Gardens at the Airport” — inspired by “Gardens by the Bay”.

In partnership with CapitaMall Asia, the 3.5 hectare plot of land will be transformed into a swanky multi-purpose facility boasting retail shops, restaurants, an outdoor garden, and even a gorgeous waterfall! 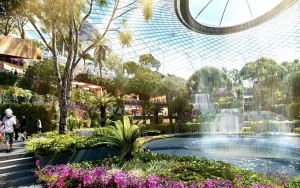 These further redevelopments will boost the airport’s handling capacity to 85 million passengers a year, keeping Singapore competitive as an air hub. Terminal 1 alone will handle 24 million passengers instead of 18 million and have a new basement car park!

Project Jewel begins construction next year, and there’s also talk of Terminal 5 to come by the mid-2020s, doubling the airport’s current capacity.

Next, the new air base.

Located in Changi East, this new military air base will have a fourth runway and replace what is now the Paya Lebar Air Base.

This will free up height restrictions in the Paya Lebar area and allow for new and exciting things to take place in that part of Singapore — namely, new homes, offices, and factories.

This spells a new town.

Those 800 hectares will become residential, commercial, and entertainment spaces. It seems Paya Lebar Central will be larger than Bishan or Ang Mo Kio, and could potentially hold 50,000 to 60,000 new homes!

80% of those homes could be HDB flats with facilities like parks, schools, and commercial developments, and without the current height restrictions imposed by Paya Lebar Air Base, the new buildings will be about 30 to 40 stories high instead of the current 12 to 15 stories.

20 mins with a taxi driver: Is Uber a threat to licensed cabbies?

The only downside is that none of this will actually be operational until the next 20 to 30 years, but homeowners in that area are already optimistic about property value rising.

Finally, a new port is coming up in Tuas, which will efficiently consolidate all port operations and free up a big chunk of land across Tanjong Pagar, Keppel, Brani, and Pasir Panjang.

This prime Tanjong Pagar area— 1,000 hectares — will be turned into what they’re calling the Southern Waterfront City. It will stretch from Shenton Way to Pasir Panjang and be two and a half times the size of Marina Bay!

This will keep us competitive as a hub port and at the same time open up another Bayfront-styled tourist attraction!

These exciting developments have been mostly well-received by netizens, generating some interesting comments about the moving of the air base on airliners.net:

“Hmm, I was expecting Seletar to go under before Paya Lebar, given that Punggol is probably the hottest development area in Singapore today and Seletar, if not mistaken, only serves general aviation while PL is an important AFB (and the importance of keeping redundancy). Good news nonetheless, expect the best to be even better…” -loalq

So, it seems like the sky is indeed the limit!