Not content with their seemingly poor understanding of how to get rid of those wavy red spellcheck lines, SingFirst has outdone themselves by featuring a completely imaginary language on their campaign banner without realizing it was not Tamil. It gets even more depressing when you look at Tan Jee Say’s response:

I would really like to know how it was “not convenient” for members or friends of party members to check that the language used in the banner was a real language, and not used solely in Middle Earth by orcs.

Guys, if you find it “not convenient” to check your campaign collaterals for small things like, I don’t know, IMAGINARY LANGUAGES, then I’m not sure how anyone is supposed to take you seriously when you want to deal with serious and very inconvenient things, like policy debates.

A poison pen letter alleging that Workers’ Party candidate Daniel Goh had an affair with a graduate student was sent to the media and WP party leaders (there was no evidence to go with the allegations, apparently). According to Daniel Goh’s Facebook status update, Lianhe Zaobao was the mainstream meia outlet that broke the story. Daniel Goh has refuted the allegations, while Png Eng Huat has also stated that the WP welcomes scrutiny of their candidates. 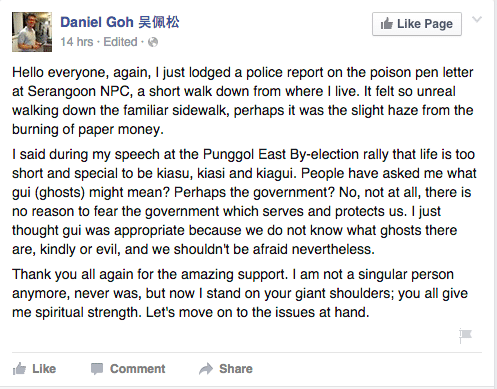 A lot has been said about this already, so I’m going to keep this brief.

Allow me to refer everyone to Rule #1, which applies whether you are a politician, a journalist, or just a professional kaypoh: Don’t anyhowly.

The Funniest Copycat Members of Parliament In Singapore

The Elections Department’s office saw a lot of action today from potential candidates, including five Singaporeans who are ready to contest as independent candidates.  One of them was Ms Fatimah Akbar, who officially wins the contest for best doorstop interview statement of GE2015 so far:

“We are sending out a message to all political parties that whatever it is, you should be sending candidates who are qualified and capable. Some of the candidates fielded inspired me to run, because with their background, my potted plant can be an MP.”