The Golden Thread in the life of Othman Wok

A day after Former Cabinet Minister Othman Wok was laid to rest, moving tributes were paid specially to a man who was a part of Singapore’s founding leaders at a memorial service held at the Victoria Concert Hall.

6 moving and fitting eulogies including that of Prime Minister Lee Hsien and Labour Member of Parliament Patrick Tay were delivered.

Across all the moving tributes, there was a golden thread that weaved the 6 eulogies: his commitment and dedication to the cause of Singapore.

Each spoke of a different aspect to which he was committed: Multi-racialism, Labour Movement and his Family.

Here are a couple of insightful highlights from the eulogies:

“Some years ago I visited a national education exhibition in a secondary school. A student explained to me the exhibits, then asked me earnestly whether I too had celebrated Racial Harmony Day when I was in school. I was taken aback. I said “No. When I was in school, there was a race riot on 21st July 1964. That is why we now celebrate Racial Harmony Day every 21st July!” That was the legacy that Othman and his comrades left us.”

“My wife and I were happy and honoured to be invited to celebrate his 91st birthday with his family and friends at his home. What could I bring such a respected elder, who had lived such a full life? I decided to bring an album of photos of memorable moments in his life journey, including a dashing picture of him as an officer cadet in SAF uniform. I hope it gave him pleasure and satisfaction.” 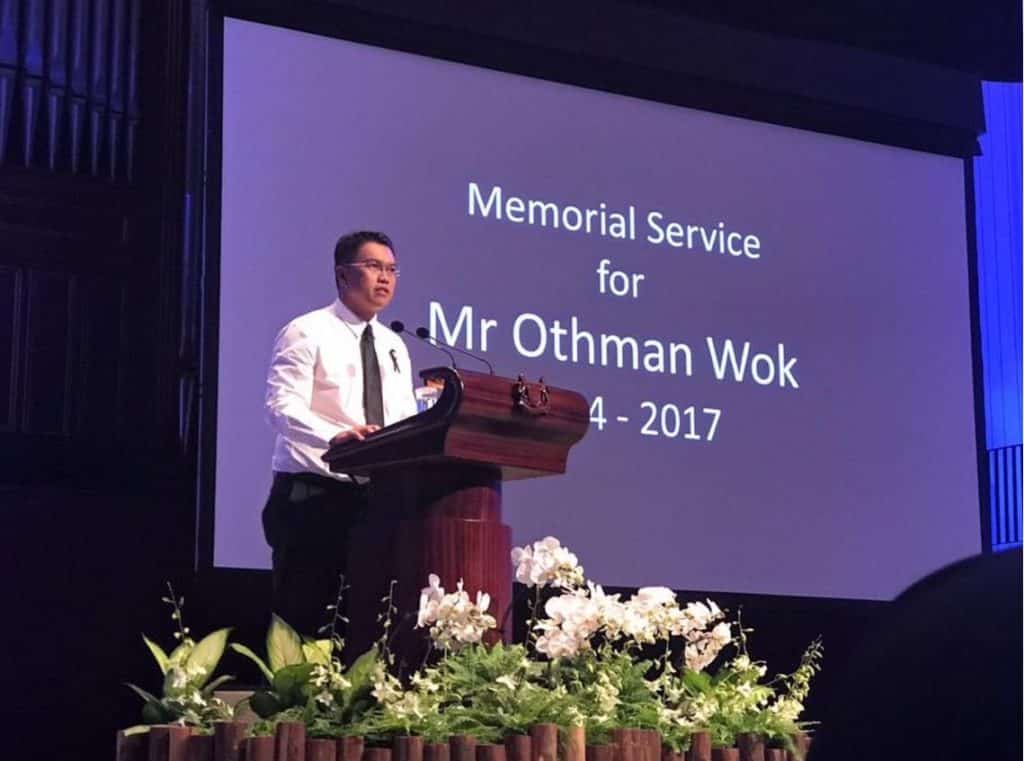 “Encik Othman firmly believed in the power of unions – The fact that workers should have the right to determine their own working conditions. His fellow unionists felt that he would fight for them as their representative and leader. They elected him as Honorary Secretary of the Singapore Printing Employees’ Union (SPEU) in 1951… In 1953, he represented Malaya Publishing House (MPH) workers in a wage dispute. He fought hard, and won them better terms.”

“Where my contribution to Singapore is concerned, I leave it for others to judge me. I think I’ve done the best that I could do.” – Encik Othman Wok