Why The PAP Cannot Win 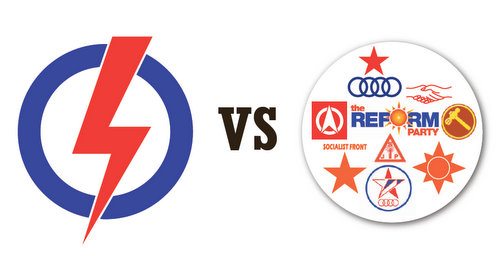 Being paid a high salary somehow equates to even higher expectations by the electorate. To be honest this is a no-win situation for ministers from the ruling party.

Let’s face it. If I had a choice (not that I do, nor am I of that calibre anyway), which would you choose:

Do bear in mind that in the case of (A), there will be additional perks thrown in like

1.            free meals – as you would first and foremost be a Member of Parliament which will require you to attend numerous community functions almost every weekend or festive season (where you might even be having more than 3 dinners in a single night)

2.            free parking – at all the places you need to be especially at 7am on Sunday mornings which are peak periods at neighbourhood markets and hawker centres

3.            personal protection – bodyguards who are with you every waking hour, including a security person from the police force at your gate or nearby in your neighbourhood

Should you choose (B), the perks could be much better but we may never know as private corporations are not always obliged to divulge full details of benefits given to their top management, apart from declaring their salary and bonus packages.

But from the known published sources (and of course a lot of hearsay), CEOs are known to get:

3.            school fees for their kids in private international schools (that cost more than what the average Singaporean takes home each month)

Between (A) and (B), there are many more differences, some of which include:

i.             Minister MUST take shit and criticism from the public and suck it up, cannot retaliate or respond harshly (caveat: if lines are crossed, can opt to sue until the other party’s pants drop)

ii.            CEO and family for that matter, can live it up, drive around in a Ferrari, Lamborghini, Porsche, just add to the list of luxury marques, dine at expensive restaurants, throw lavish parties, go on ultra-lux vacations, etc. Best part is, they can post all this on social media to show how successful there are

iii.           Ministers are not humans, they are not allowed to make mistakes, even if mistakes are made by their subordinates (or subordinates below them).

iv.           CEOs can make mistakes and get multi-million dollar payouts as compensation for them to leave their positions

v.            The more glamorous the CEO is, the more he (or she) is admired. Better still if they are arrogant – it’s a sign that they are tough leaders who run a tight ship.

It certainly seems that life is unfair. Given the choice, I would rather be a CEO. I’ll be jetting off to Ibiza with a bevy of beautiful sweet young things to soak up the sun and excitement in parties where I could be rubbing shoulders with international celebrities. And if it makes it to the local social media scene, I’ll be trending through the roof!!

Seriously, who wants to be a boring Minister who has to slog for an organisation called Singapore, always maintaining a “public image” for risk of giving citizens the wrong impression, and get criticised left right and centre all the time? Even $3 million is not worth it.

Common gripe is that Ministers are not of CEO calibre and should not be compared in the same light. I completely agree – that is why it is a good thing the government has not raised the salaries of ministers to the same “equal” levels of CEOs.

But therein lies one truth that cannot be denied. If you want to attract talent, you have to pay a fair market rate to get them. If not you would lose them to the private sector.

Naturally many of you will find all this familiar, or that I am even being a parrot and repeating what someone else said previously.

Yes, the late Mr Lee Kuan Yew said all this way back in 1985 – a whopping 35 years ago! Talk about being visionary.

Of course most people will disagree. Not for logical reasons, but only because they cannot accept the fact that such individuals are paid this amount. As I highlighted at the beginning, being in public office puts one in the public eye and scrutiny perpetually.

The only reason I can fathom why they still chose this thankless job is because it’s a sh*t job but someone has to do it.

And I guess their reward all these years is despite whatever criticisms they face, they have always stuck to the plan. A plan that wasn’t just crated yesterday, but decades ago.