Anyone saw the above illustration?

It is a fine example of how social media has been misused to mislead the public. Now, I got curious and very suspicious of the origin of this information, so I checked out the press statement by the National Transport Worker’s Union and this is what I got:

– There have been media reports that while SMRT bus drivers will have a $225 increase in basic salaries (for Singaporeans), they will have to work 5 to 6 days.  And somehow actual salaries after taking into account overtime will actually drop.

– Yes, working arrangement has indeed moved from a 5 day to 6 day week, but at the same time, working hours per day will be reduced, from 8.8 to 7.3 hours.

How does running businesses help NTUC fight for workers’ rights?

– With shorter working hours every day under a 6 day week, drivers now accumulate overtime every day, instead of only on the 6th day. With a higher basic wage, the overtime rate per hour will go up, further boosting their pay. Below is a simple example to illustrate. 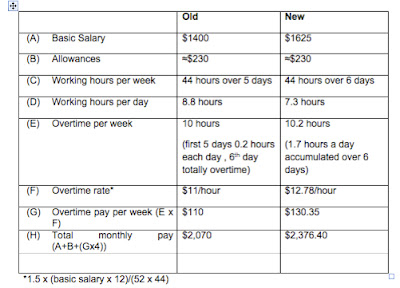 An excerpt from ST quotes Ong Ye Kung, Executive Secretary of NTWU: “Both public transport operators have been in this line a long time. I trust that by now they understand that in bus driving, you should never fill all vacancies. Instead, leave some vacancies, so that there is always overtime for bus drivers. If for some reason new managers forget this, the union will remind them in very clear terms,’ he said in response to the overtime concerns of the bus drivers.
————————
Post Writing Notes
The following are comments from reader “Deegroom”, he says “Well, i am wondering since they can shave 1.5 hrs off every workday and and make you work an extra day a week. Why can’t they just raise the pay and not mess around with the workdays per week. All of us know that its more siong to work a 6 day week (7.3hrs) than 5 days (8.8hrs). Working that extra day will just eat into your time with family or rest time.”I must admit, I did leave out the section on why SMRT changed the work days to 6 days. According to their press release, the SMRT wanted to keep up with standards in the service industry: that is to provide service 7 days a week (which makes sense anyway). By reducing the number of hours they work each week and increasing their salaries, they solve two problems: wages and lack of manpower.It is not as if a 6 day week is something new for SBST. According to their comments “SBST bus drivers have always been on 6 day week.  So are the bus drivers from TIBS and later SMRT, until recently in 2006 when they were switched to a 5 day week.”If you think about it, the easy way out for the SMRT would be: to hire foreign labor to makeup for the loss, but that’s not going to go down well with the public.
So here’s a new illustration for you to share!
Combat those internet trolls!